Antibody-drug conjugates (ADC's) are emerging as a new approach in the treatment of cancers. An ADC comprises three critical components: the antibody itself, the cytotoxic payload, and between them, a linker that plays an important role for toxin release. A spacer is often introduced in the process of making the ADC and functionally facilitates toxin release.

Architecture of an ADC

ADC's can be produced either by chemical or enzymatic conjugation, both of which are available at MImAbs.

Site-specific conjugation is preferentially performed at MImAbs by one of two methods:

A detailed description of the technology developed in collaboration with Innate Pharma is available here.

The cytotoxic payload, but also the linker, are critical in the design of an ADC. MImAbs has a growing collection of available toxins and linkers that can be adapted to the needs of a given project.

Because only 2-3% of an injected ADC reaches its target, payloads need to have a strong cytotoxic effect at the nano- to picomolar range. There are three major families of cytotoxic payloads: microtubule-disrupting, DNA-modifying and RNA-modifying drugs.

They are crucial to drive toxin release at the right time and place during treatment. One of two classes of linkers can be used:

These ADC formats are produced at up to a 100mg-scale.

Note : Other toxins, chemical moieties and linkers can also be considered if required. The conjugation methods available at MImAbs require either maleimide handle, or click chemistry handle (Azido, cyclo-octine or TCO) on the toxin or chemical moiety.

Two sequential steps are performed and require a few mgs of conjugates:

Model cell lines are produced by transfecting appropriate cells to express the target protein. If available, cancer cells that naturally express the target are also used. In both cases, target expression is assessed by flow cytometry.

In this example, the assay uses an antibody coupled to two different toxins (left and middle) and an isotype control (right).

In this example, the assay is performed using an ADC and an isotype control. 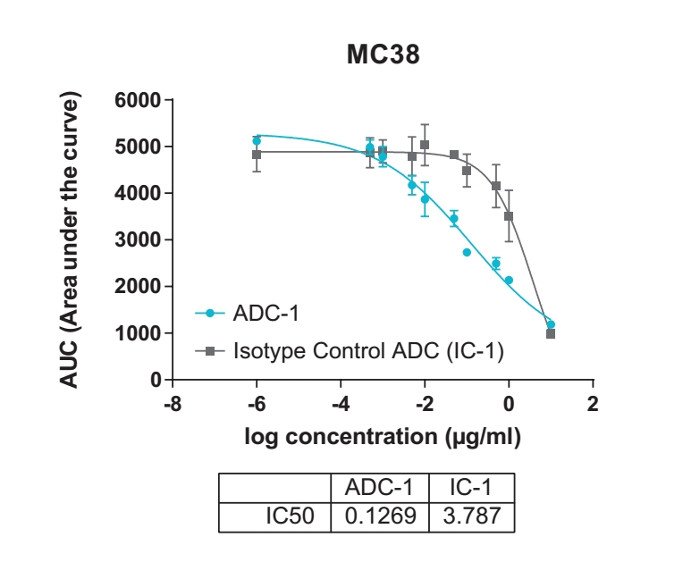 Cancer cells of human origin are grafted into immunodeficient mice (xenograft models), followed by standard bioanalysis of the ADC (MTD, PK, PD), and assessment of tumour size variations and mouse survival. Twenty to 100 mg of an ADC are required at this step.

Mice were treated with vehicle, isotype control (IC) or the ADC of interest at two different doses. The treatment led to reduction in tumour growth (dose 1) or regression (dose 2) compared to IC and vehicle.

The animals were treated as described above. Mouse survival was significantly better with the ADC treatment at both doses than with the IC and vehicle treatments (statistics: Mantel-Cox test).